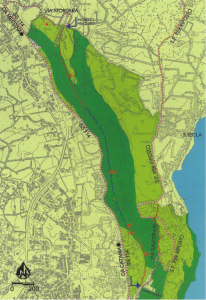 It is a segment of the state single-track railway line which was built in the second half of the nineteenth century and deactivated in the Sixties, following the construction of the new double track in the tunnel upstream of it.The disused segment starts from Grotte and ends at Mortara, close to Santa Maria Ammalati, next to the new railway.The whole trail, about 3 km long (that is, the whole extent of Santa Tecla’s Timpa), is perfectly flat and runs partly enclosed among high lava stone walls, partly through four tunnels and, over extended stretches, it gives wide views of the plain below.At close range you can observe the distinctive rocks that make up the Timpa, the “works of art” of the ancient railway engineering and, above all, the vegetation growing along its sides, made of traits of scrub and forest vegetation consisting of Oaks and Hackberry trees.A possible access to this route is the Provincial Road to Riposto, near the little church of Santa Maria della Neve, where you can visit an artistic eighteenth-century nativity. About 300 metres below, just opposite the entrance of via Malascesa, the embankment holding up the old railway tracks meets the Provincial Road. Here is a narrow railway underpass you can get around by going up the embankment, climbing a narrow winding path that develops next to a leafy Hackberry tree (Minicuccu), and then getting to the old track, close to a railway “groundhog” on which stands out a large letter T.From here, facing the sea you can admire nice views towards the village of Santa Maria La Scala and, upstream, villas and impressive abandoned terracing works. Moving forward for a few hundred metres you walk among high walls, encountering the remains of a tunnel formed by lava flows. The tunnel was broken into two parts during the excavation of the railway line: on the stub facing the marina can be seen the sections of two characteristic laminar rolls, whereas the stub upstream is protected by stonework, since it was used as a shelter for those involved in the railway maintenance.Proceeding northward you get to the entrance of the first rail tunnel (in fact, the second of the system, as the first is not included in our trail), about 250 metres long, which receives light from the two ends and through a wide window on the east side. Moving forward, you can see two other tunnels. The first is straight and short (about 150 m) and therefore lit by sunlight. Inside are visible several lateral niches to accommodate workers in case of an approaching train. The second one is 468 metres long, as we read on a plaque at the south entrance, and you must use a torch to cross it. The keystone at the north entrance is engraved with the date “1912”, dating back to the time when consolidation works were carried out in order to protect the tunnel. Outside the gallery your gaze is lost in the landscapes of the hamlets of Santa Tecla, Stazzo and Pozzillo. On the upstream side you can admire Donwry Oaks among which stands out a beautiful specimen of Mastic. From here begins a long uncovered stretch (about 1200 m): the upstream side looks onto terraced hill areas and the one towards the sea stands above the multicolored landscape of crops and the Ionian coast. At the end of the railway line you will find a locked gate, so you need to go back.

Beyond the gate lies the northern part of Santa Tecla’s Timpa, “contrada Mortara”, characterised by extended farms planted with lemons, clingling to unstable terraces.To get from Catania to the district, reach the intersection between the SS 114 and the Provincial Road to Santa Maria Ammalati, north side. Here, eastward, is the entrance to a narrow paved road, Via Mortara, which leads to the hamlet of Santa Tecla.After about 200 metres, you will reach a crossroads: take the right branch, because the one on the left changes its name (via D’Amico) and leads to the hamlet of Scillichenti. Going down among high parapets, after a while the road widens and makes a large U-shaped turn overlooking a bridge over the new railway. From here you can admire a wide view on Santa Tecla’s plain and the citrus crops clinging to this part of the Timpa.If you move forward, via Mortara seems to end in a group of rural tenements, but in fact it continues with a T-path: the east branch becomes a hardly passable cart track, whereas the west branch turns into a dead end. In the latter is located the entrance to a private land, closed by a gate which is enriched with a distinctive shrine topped by a cypress. Next to this gate is another one, barred; if it were opened, from the north side it would take us to the site of the ancient railway line.The east branch, an uneven and steep cart track, rejoins the paved road leading to the Provincial Road to Riposto, close to the hamlet of Santa Tecla.