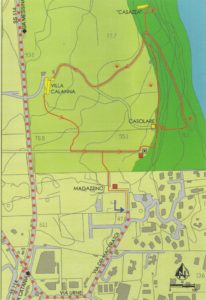 The Gazzena district is undoubtedly one of the most interesting areas from a naturalistic and landscape point of view.Following the signs for the former Perla Jonica hotel, you reach via Urna and then, on the left, Via Dei Maceratoi, from where you turn left into the dead-end road to reach the bar pointed out in the planimetry. From there you walk through a typical countryside alley (rasula) to an abandoned warehouse built on the high ground, next to which is a northward path leading to another long and well-preserved rasula, sided by a typical irrigation canal (twill).Walking all the way towards east, you can observe a ruined building which hosts a well and the remains of a steam machine, used for lifting water to irrigate the citrus grove and vegetable gardens located in the underlying and overlying plains. Since all the arable land has now been totally abandoned, you can observe the revival of the original Mediterranean scrub.Walking past the well, you overlook the first step of Gazzena: here the ground presents two parallel fault scarps that create as many degrading ledges.Staying at the top ledge and walking along the margin towards north for almost 100 metres, you reach an abandoned farmhouse flanked by a peopling of Sumacs, once used for the leather tanning process. From here begins the descent down a steep and winding path where, on a lava stone slab, can be seen engraved symbols and the inscription: “Arcangelo Calanna did good to this land in the year of our Lord 1868”. After crossing the plateau, you can look out on the verge of the second fault line from where opens up the precipice of the marine timpa. The view is unique and exciting: lava boulders, clefts and inlets, halophyte vegetation and crystal blue sea. Parallel to the edge of the escarpment is a path running along the ancient dry stone wall with typical “paralupo” stones.Continuing along the path, you reach the slightly uphill plateau which leads to a building (Casazza), recently restored and surrounded by Downy Oaks. Alternatively, it is possible to reach this building through a rasula semi-hidden by vegetation, which develops on the edge of the first step at a height of about 60 m above sea level.The path on the way back is partly different: going back to the plateau, to the right you can see a wide path leading to a magnificent Patrician residence (Villa Calanna) which, despite its state of total abandonment, is a gem of rural architecture. A path that expands towards south-east will bring you back to the abandoned warehouse from which you have started the excursion.